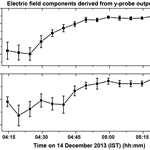 Abstract. The Earth's electrical environment hosts a giant electrical circuit, often referred to as the global electric circuit (GEC), linking the various sources of electrical generators located in the lower atmosphere, the ionosphere and the magnetosphere. The middle atmosphere (stratosphere and mesosphere) has been traditionally believed to be passively transmitting electric fields generated elsewhere. Some observations have reported anomalously large electric fields at these altitudes, and the scientific community has had to revisit the earlier hypothesis time and again. At stratospheric altitudes and especially at low latitudes, horizontal electric fields are believed to be of ionospheric origin. Though measurements of these fields from a balloon platform are challenging because of their small magnitudes (around a few mV m−1), a suitably designed long-duration balloon experiment capable of detecting such small fields can provide useful information on the time evolution of ionospheric electric fields, which is otherwise possible only using radar or satellite in situ measurements. We present herein details of one such experiment, BEENS (Balloon Experiment on the Electrodynamics of Near Space), carried out from a low-latitude site in India. The instrument package for this experiment is comprised of four deployable booms for measurements of horizontal electric fields and one inclined boom for vertical electric field measurements, all equipped with conducting spheres at the tip. The experiment was conducted from Hyderabad (17.5° N, 78.6° E) during the post-midnight hours on 14 December 2013. In spite of a few shortcomings we report herein, a noticeable feature of the observations has been the detection of horizontal electric fields of ∼ 5 mV m−1 at the stratospheric altitudes of ∼ 35 km.